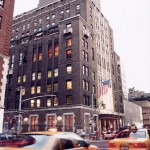 The Quantum Activist is
coming to the 92nd Street Y

If you can make it in New York, you can make it anywhere…so we are pleased to announce that the Quantum Activist is making its New York City debut on March 21st at the historic 92nd Street Y. The 92Y has an impressive and storied history of lecturers and performers. We will be at the same venue which has hosted Dylan Thomas, Elie Wiezel, Bill Clinton, Ani Difranco, Francis Ford Coppola, Frank Gehry, TS Elliot and many others. Again we are pleased to be on hallowed ground. To make the evening even more exciting, the film will be introduced, and the Q and A will be hosted by Leonard Lopate from the Leonard Lopate show in NYC. This well known New York radio talk show host has recently interviewed guests such as John Updike and Francis Ford Coppola, and is known for provoking and lively conversations with noted intellectuals. His style has been called smart and unpredictable – we look forward to his interaction with Dr. Goswami.

We will be with Dr. Goswami for this event, assisting in a Q&A after the event. We hope to meet you there!

New York, New York it’s a hell of a town…and on March 21st New York City, the center of the world, will become a center for quantum activism.